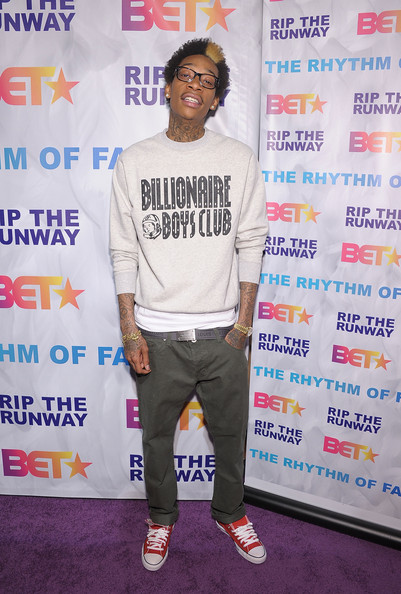 Moments before his performance at BET’s Rip the Runway, rapper Wiz Khalifa sat down backstage with style maven Terry Mcfly to discuss his style. During the interview Wiz also subtly tells us why his upcoming album is titled “Rolling Papers”.
Terry: How would you best describe your style?
Wiz: Versatile, I switch it up a lot, simple though, basic
Terry: Do you consider yourself a trendsetter?
Wiz: No, well yea, people say I am so I guess I gotta go off what they say, but I just wear whatever I want
Terry: Do you wear prescription glasses or are those glasses just a fashion statement?
Wiz: These are totally prescription, yea I’m blind
Terry: What would be your go-to sneaker or shoe?
Wiz: Chuck Taylors
Terry: Name 3 must-have items that you would pack into your backpack
Wiz: A hoody, a pair of 501s, and….. does it have to be just clothes?
Terry: No, it can be whatever items you want
Wiz: Oh, then it would be some papers and a grinder, that’s 4
Terry: Describe the Pittsburgh style
Wiz: It varies, you know what I’m sayin, it switches up….you got people that are into the skater fashion, you got the urban crowd as well…then you got the preppy crowd too. It switches up, everybody’s doin their own thing.
Terry: Which fashion items do you love to see on a woman and why?
Wiz: I like how a chick’s shoes look, I like a chick with pretty feet. The shoes make their feet look awesome or maybe their legs may look awesome because of their shoes. Even though the shoes may not feel good to them, they always look good on them.
Terry:  Do you prefer sneakers or heels on a woman?
Wiz: I don’t have a preference, you know its whatever. There could be sneaker days and heel days.
Terry: One last question for you Wiz, Have you got any new tattoos lately and if so where?
Wiz: Yea, I have! I’m always getting new tattoos but I totally stopped explaining and talking about my tattoos. Mainly because it’s become such a fad that I don’t even explain em no more. If people see them when they pop up then they can catch a glimpse, just know that I’m always gonna be gettin em.
Terry: Thank you for your time and Nice to Meet you!
Wiz: Thank you sir, Great Meeting you too Pimp!
Check out Wiz Khalifa's performance on BET's Rip The Runway on March 21 at 10PM!
Posted by Unknown at 1:32 PM