I finally had the chance to check out Battleship this weekend, I was not amazed nor disappointed. The film was simply alright. I initially had no interest in the film but I was curious to see how they would convert the classic board game concept into an interesting movieconcept. The whole alien thing was a little weird but they did manage to execute the board game concept in an interesting scientific way. I found myself yelling "You sunk my Battleship!" about 2 or 3 times when they called out position codes, LOL. I was also eager to see Rihanna's acting debut. I was disappointed by Rihanna's performance in this film, she had all one liners and it sounded like she was mumbling most of the time trying to conceal that accent. Just like on twitter, RiRi was playing a girl with a rude personality. Throughout the film it seems like they are trying to be funny in just about every single scene but it just doesn't pair well with the serious threat of an alien invasion. The movie Battleship is filled with lots of action and old people telling old people jokes. By the way, these old people are REAL navy vets. Overall, the movie is worth seeing but it's not a great spectacular film, Battleship is "a Terry McFly Maybe". (Meaning see it only if you're a Rihanna fan or you already saw the Avengers and need a new movie to watch) 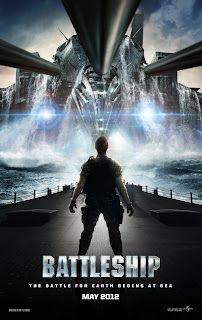