I had no clue of what to expect from the movie "Think Like A Man", I've never read the book at all. I thought it would be a film that bashes men and encourages women to be players, I was so far off with that assumption. "Think Like A Man" was an AMAZING film, men & women can both learn a lot from this movie. The movie has an amazing soundtrack with a mixture of classic and new songs from the official motion picture soundtrack. The movie features an all-star cast of actors, even the people with brief appearances are major actors. There's plenty of eye candy for both the men & women, expect to hear alot of the word "DAMN!" from both sexes in the theater. The characters of this movie were so well developed that everyone will find someone in the film that they can relate to. If there was an MVP of the film, it would definitely be Kevin Hart. Kevin Hart will have you in tears laughing from beginning to end. "Think Like A Man" is TERRY MCFLY APPROVED! ...A MUST-SEE! I rate it a 5 out of 5. 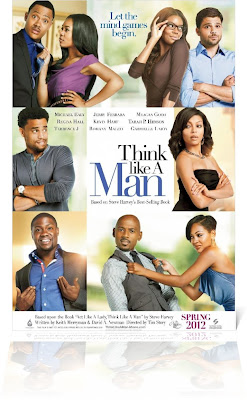 Four friends conspire to turn the tables on their women when they discover the ladies have been using Steve Harvey's relationship advice against them.